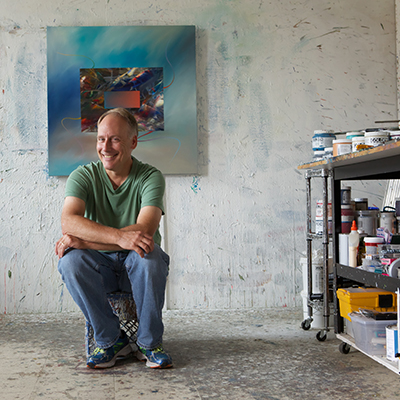 true love of colour and the exciting,dynamic interaction of colour with shapes –these are the wellsprings of creation for Joel Masewich. Exploration of this interplay in large format abstract canvasses has brought him artistic success. Through a complex surface of dragged, opaque pigments, bold and distinct areas are scraped away to reveal lower layers with new relationships of colour, form and depth.

Joel’s studio in a century stone building inSalem is stacked with large pots of acrylic, huge brushes standing in pots alongside a variety of trowels. For Joel, “A trip to the hardware store is a real source of inspiration.” The walls of his studio are prepared to receive mural-size canvases which Joel mounts on commercially made stretchers. With these tools he tries to capture a spontaneous moment, to use his years of training and experience to access ideas with freshness and directness. The final gesture is very immediate.

Joel began as a high-realist wildlife artist, when he entered Central Technical School in Toronto on the advice of a guidance counsellor. “Suddenly,” he says, “all my horizons expanded.” Students were drawn from every borough of the city, and Joel met types of people he had not known at school in Etobicoke. They shared his goals. He studied under outstanding teachers like Alex Turner who taught the science of colour. Joel gives credit to Central Tech. for the freedom allowed students to explore their own directions, and he recognizes the invaluable support of his parents for his chosen profession of visual artist.

A trip to New York with the school was a major turning point. As Joel saw the work of contemporary American artists like Robert Motherwell and Rothko, abstract art became

living and viable, and large format canvases opened new directions to him. In 1984 he began to explore. “I had so much energy, just to paint!”

For four years Joel worked as assistant to Ed Bertram in King City, learning the disciplines of printmaking. Today he continues to enjoy the freshness and immediacy of monoprints, which he creates with Elora artist Stuart Oxley. He also attended the Ontario College of Art for two years and the University of Victoria Outreach Camp in Nelson, B.C.

Approximately 60 percent of his works are sold to individual homes. They brighten the large wallspaces of custom-built modern houses or the family room additions of renovated older homes. Initially tentative about large abstracts, people who live with them over a time come to appreciate their depth. Forty percent of his works are sold to business. Joel is represented in Toronto by Gallerie Beaux Arts and Affairs of the Art and in Montreal by the Shayne Gallery. He also has a number of consultants who actively market his canvases. A recent buyer was the Supreme Court of Ontario.

Joel is a very active and participating father of two small children, Tyler and Avery. He came to live in Elora after marriage to Jill McGeorge. When they were courting, Jill  attended the University of Guelph, and they often drove here: “Elora was magical to us.” Now Joel’s parents also live here for the summer months.

Recently Joel has been trying to resolve new directions, washing his mind clear with explorations of planes and elementary shapes. He goes back to a sketch book with Prism colour pencils and graphite. He draws. There is no path, no bridge, except reliance on his own artistic instincts, honed by experience.

There is no path, no bridge, except reliance on his own artistic instincts, honed by experience.

Since 1992, Joel has built a new studio at home. Eaton’s has commissioned numbers of oversized paper pieces and paintings from Joel for stores in several provinces.

In 2000, Joel had an exhibition at the Wellington County Museum and Archives. “Passage to Salem” provided an overview of the paintings that developed between 1997 and 2000. This period was a time of moving from Elora to Salem. A limestone coach house was converted to studio and home. Joel and Jill oversaw this project and did the vast renovation together. The paintings in the show were collage based, assembling the elements into a new vision. A crossing into abstraction. The invitation to “Passage To Salem” showed the Irvine Bridge, which today is a symbol of Joel’s work. Stainless steel collage was the focus ofthe large scale paintings. Lazer cut shapes are placed over top of a large abstract canvas.

In 2004, as chair of the Elora-Fergus Studio Tour, Joel worked with several artists to develop a full colour guide. Complete with local advertising, the guide book showcases 37 local artists. The Studio Tour has become a main fall event for showcasing his own latest paintings. The main galleries where Joel’s paintings can be seen are: Davis Canadian Art in Stratford and Circle Arts in Tobermory. Both these galleries provide a professional venue for his new work. Summer 2004 Joel embarked on a Nahanni river trip. The Northwest Territories would provide a new expanse of inspiration.