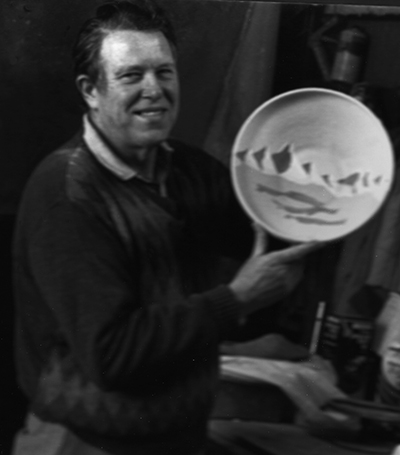 hen Peter Knudstrup came to Elora in 1967, a new appreciation of the simple beauty and earth-quality of pottery was alive, nurtured by the flower children of the 1960’s. With imagination and a sense of adventure he and his wife Nancy bought the old stone church on Henderson Street, which became Peter and Nancy’s Pottery. Originally a Presbyterian church, then an early cinema and a furniture finishing workshop, it now became the first of many artisan studios that were to revitalise Elora.

The characteristic blue-grey and ochre-brown of Peter’s Earth n’ Sky pottery has slowly evolved over the last twenty years. Trained as a Ceramic Engineer in his native Denmark, he is different from many potters in that he understands the chemistry of glazes and can make and alter recipes. He also uses an original clay body, made from five clays, blended in the blades of a pugmill.

Peter’s love for pottery developed when, as a boy, he played with clay and helped to fire the kilns of a small ceramic firm near his father’s country inn in Denmark. Later, looking for a practical but artistic career, he studied ceramics in a five-year apprenticeship program. For a short while he worked in Norway and Denmark, but Europe’s ongoing recovery from the devastations of war caused him to feel “pent up” and itch to go abroad.

With his brother and two friends, Peter made plans to sail to Nigeria to build ocean-going vessels. When this enterprise crumbled, he looked for another opportunity. Wandering down the street he passed a free film showing a travelogue for Canadian National Railways. The panoramas of the waving wheat fields, mountains and sparkling rivers of Canada were an inspiration. Peter walked right over to a travel bureau and asked for his passage to Canada to be arranged. Transport was still scarce, however, and it was six months before he was able to sail to Canada. The 1951 voyage was certainly a trying one. Aboard an old Liberty Ship run by an international refugee organization, 1,000 passengers endured 11 hurricane- whipped days before finally arriving in Quebec City.

Heading up to Toronto, a quick survey revealed no prospects for employment in ceramics. Peter went north, to become chief dynamiter on the logging roads of Temagami. He parallels his life there to that of a concentration camp. It was impossible to walk out of the wilderness in -40 deg. weather. Mail was censored, living was rough. One night, by chance, he heard a supply vehicle arriving. Quickly gathering his goods together, he jumped on for a ride back to civilisation.

Back in Toronto, Peter found employment with Alcan, a company which appreciated his chemistry experience. While at Alcan, he met and married a company nurse, Nancy Chataway. Independent by nature, he felt himself “owned and swallowed whole” by the large multinational company. With the favourable climate for pottery in the 1960s, Peter began to search for ceramics equipment, learn English ceramics terminology and hunt down a studio of his own.

When the Knudstrups first saw the abandoned old Chalmers Church in Elora, snow was piled against the door. Zoning for the building was non-existent, though they were told that too much noise or an abattoir on the site would be unwelcome. With the help of friends, they spent the summer shingling the roof. Peter bought the necessary ceramic equipment at auctions and finally, after two years, the couple came to live and work in the church, naming it Peter and Nancy’s Pottery.

Since their adventurous relocation in Elora, the Knudstrups have raised three children: Lisa, Martin and Kirsten, and have contributed much to the community. Nancy has returned to nursing and Peter’s imaginative studio is visited by many tourists. Other artisans have sometimes shared the space but the high ceilinged nave of the church remains undeveloped and continues to stimulate dreams. Peter discusses the possibility of setting up a school to pass on his knowledge of glaze chemistry to young Canadian potters. But the freedom and independence he experiences as a solitary craftsman would be hard to relinquish.

Do we adequately express the value to our society of Peter at his potter’s wheel, preserving age-old traditions and the unique beauty of hand crafted ceramics?

When the Knudstrups first saw the abandoned old Chalmers Church in Elora, snow was piled against the door.

Earth n’ Sky pottery is still handthrown, glazed and fired at the pottery in the big stone church on Henderson Street. A wood-stove now heats the place in winter, warming all who visit. In the summer, the thick stone walls provide an oasis of coolness where Peter can be found working at the wheel.

Peter and Nancy sold the pottery property in 1998. Peter has created a small studio at home and continues to make some pottery articles for old customers, family and friends. He also enjoys his greenhouse and does a lot of gardening.

Fredrick Peter Knudstrup passed away on February 22, 2006 peacefully at his home following a productive day at the Potter’s Wheel. Peter was in his 77th year.