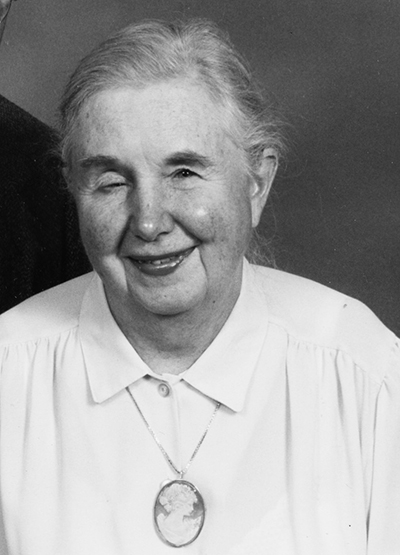 or many years it seemed Lorraine Drew Brook was a legend in this area. After her marriage in 1973, she frequently came to spend weekends on the cliffs above the Irvine River in Sem Whistler’s mill, beautifully restored by her husband, Hugh. The couple lived in Toronto, where Lorraine taught singing and performed. We heard she was a remarkable woman. In 1986, the Drew Brooks retired to the mill in Salem, and our communities became enriched by Lorraine’s vision of community life, her involvement, her voice and her joy in living.

Born in Galt (Cambridge), Lorraine remembers declaring at three years old that she would like to be in the music world. During her school years she spent the week with her grandmother and frequently heard her singing over the woodstove in a high, clear English voice when she woke in the morning. Her entertainment was singing songs around the piano with the family. During primary and secondary school she took part in musicals, madrigal groups and sang in many festivals.

Lorraine’s early life was shadowed by almost yearly eye operations in an effort to save her vision. She had been born with glaucoma. She reflects that the love of her parents and the caring people around her were her support through pain. When she was 17, while preparing for the wonderful role of Yum Yum in “The Mikado”, she was told by the doctor that nothing more could be done to retain her sight. Lorraine recalls leaving the Medical Arts Building in Toronto with her mother, and hearing a street violinist playing by the door. She said then “Mum, I’m going to amount to something.” That day she went home, set the table and prepared for supper: “I decided then I’d make my life worthwhile.”

Lorraine continued voice studies through the months that followed and took her ARCT practical examination at 19. Four years later she enrolled in the Faculty of Music, University of Toronto, worked her way through and graduated first in her class. She studied with many outstanding Canadian musicians: John Beckwith, Gretle Krause, George Lambert, and Weldon Kilbourn who taught Lois Marshall. She took pedagogy and Leider with Axel Schultz, who told her she was a natural teacher for singing. At university she developed an understanding of the many styles of music, and also an appreciation of other arts and the place of music in history. A life-long dream was fulfilled when she won a scholarship to the prestigious Aspen Summer School of Music, Colorado, for which only 500 people a year are selected. “They were wonderful times,” she says today.

What is her favourite music to perform? She loves whatever she is doing at present. “I love too many things,” Lorraine says. “I think I may be a dreamer!” She likes to try good modern music, asserting that each style has its character, corresponding to something within us. She sings many traditional folk songs, but also Oratorio. Among her favourites are French art songs, like those of those of Faure and Poulenc. Modern music has a mathematical appeal, while Bach evokes a sense of spiritual affinity. Why does she love to teach? “I love to have some responsibility for the technical and musical development of a voice.”

“What enriches my life is my association with other people,” Lorraine says, “I need friendship. I also enjoy quietness in the house and working towards goals”. Certainly her positive nature is remarkable in giving courage to others. When she sings it seems that sunshine is in her voice, and her obvious joy is conveyed to those who listen.

I decided then I’d make my life worthwhile.

Lorraine and Hugh now enjoy winters in New Zealand at Geraldine, near Christchurch. Lorraine performs frequently in her winter homeland, fundraising for the South Canterbury Hospice Association and other good causes.

In 1993 Lorraine was recipient of the prestigious Lescarbot Award for volunteer work in the arts. She continues her active involvement, co-organizing performances for the Gallery Concert Series, which has as its motto “By the Community, For the Community”.

Lorraine found a dramatic new interest when she and Hugh courageously bought the Theatre On The Grand, Fergus, on November 1, 1991, rescuing it from going commercial, renovating it and saving it as a valuable space for the performing arts.

Now, in 2004, the theatre building which was saved through the timely and caring action of the Drew Brooks is owned by the Township of Centre Wellington, and continues to play a vital part in the cultural life of the community.

In recent years Lorraine has continued to work as a vocal teacher. A source of joy is her newly acquired musical instrument, the flute. Lorraine is a student of Paula Elliott.

Lorraine continues to work with the Gallery Music Group at the Wellington County Museum, finding performers for this excellent, low cost concert series.